What Are The Differences Between Corded And Cordless Blowers?

Corded or cordless? An often-asked question, which is harder to answer than it may seem at first glance.

Each of the two has its pros and cons, which are listed in the summary, if you wish to skip through. However, I still find it important to explain at least briefly why.

With all the fuss about climate change, electric blowers are becoming more relevant by the day. In addition to their lack of a combustion engine, they are less noisy than their gasoline counterparts and nowadays, thanks to the advances in this industry, you don’t even have to compromise on the power output when you decide to go for one!

So, should you go for a corded or a cordless blower?

Discussing the delicate differences between blower types is one of my favorite topics, and while corded and cordless blowers may seem as a straight forward comparison, the devil is in the details.

In essence, corded and cordless blowers differ in one, very obvious way – the former must be plugged in, the other not. Simple enough. But what does that mean in practice?

A cordless blower needs an extra component to function – A battery. This is, of course, a drawback. Batteries weigh and cost something, sometimes even a lot, which makes most cordless blowers in general heavier and more expensive than their corded counterparts.

The question therefore becomes, what do I gain by making my blower heavier and more expensive?

Advantages And Limitations Of Each Blower Type 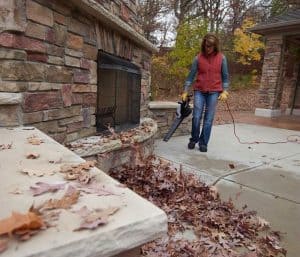 A woman clearing leaves with the Toro Super Blower Vac

To answer that question, we must consider the concept of range. A corded blower quite literally ties you down. Most of us are used to this from other landscaping equipment. So, it may not sound as that big of a deal, thanks to the existence of extension cords.

However, with a handheld blower, I find the presence of a power cord somewhat less comfortable than, for example, with a lawnmower. Not only that my range, in terms of the distance between me and the power outlet, is greatly limited, but also my range of motion, since you hold, turn and angle a blower with one hand, unlike the lawnmower, which is more stable and rigid in motion.

This may result in tripping over the cord or pulling it out by accident, which can get annoying and even dangerous. Further safety considerations arise, as the cable can pose danger if it gets wet, covered in snow, or exposed in general.

Plus, some folks’ yards are so big that extension cords simply aren’t a viable solution. 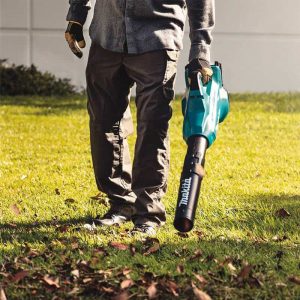 A man clearing leaves with the Makita XBU02PT

Cordless blowers have limiting factors as well – their autonomy and battery amperage. This is a tricky topic from the point of view of a manufacturer – they must compromise between weight, cost, power output and autonomy.

Often, the users end up paying the cost for this, since one of these will always end up being less satisfactory – it is up to you to decide which of the four parameters you care the least about.

So how long do cordless blowers run for? Depends on the model, but a good rule of thumb is to expect around 30 minutes from a decent model. The autonomy decreases significantly when the blowers have a “Turbo” or “Boost” mode. Is this enough? Depends on the user…

If you expect to operate without a cord for longer periods of time, you may tackle the problem of autonomy by buying more batteries, which can be charged separately and replaced when needed.

So, these are the major differences between the two. In summary:

In the end, the choice should be done on a case by case, model by model basis, based on your preferences and priorities. Hopefully, this article will help you do just that.

What about you? Do you use a cordless or a corded blower? Why did you choose that specific type? Let us know in the comments below!

What are the pros and cons of cordless leaf blowers?

Cordless leaf blowers provide freedom of movement, but are limited by their autonomy. They are also often heavier and more expensive than their corded counterparts.

What are the pros and cons of corded leaf blowers?

Corded electric blowers can operate as long as they're plugged in, and, in comparison to cordless blowers of similar power, are often cheaper and lighter. However, they limit both your range of operation and range of motion. 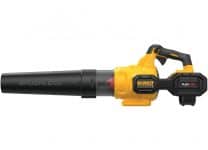 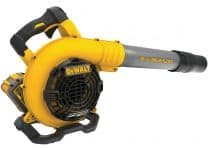 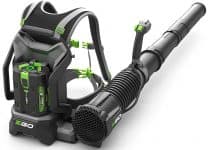